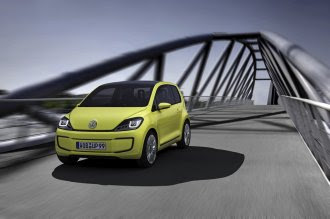 E-Up! Concept – Outlook for the Beetle of the 21st Century

World premiere: Volkswagen is presenting city specialist with electric motor Winterkorn: We will launch a zero emissions Up! on the market in 2013

Wolfsburg / Frankfurt, 14 September 2009 - Volkswagen is presenting a pioneering fleet of new sustainable automobiles at the 63rd International Motor Show (IAA) – an update on the future. The range of IAA premieres extends from the world’s most fuel-efficient production passenger car (BlueMotion) to hybrid technology and an electric car developed from the ground up – the E-Up! that is being presented in a world premiere in Frankfurt. 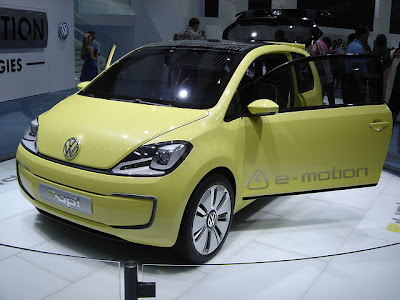 E-Motor plus TDI and TSI shape the future
Altogether, these Volkswagens are revising milestones on the timeline between present and future. "One of the basic milestones on this timeline," says Prof. Dr. Martin Winterkorn, Chairman of the Board of Management of the Volkswagen Group, "is the mass produced electric car. Yet, to be a genuine success such an electric car must be affordable to a broad customer base and must be uncompromisingly practical in everyday driving. Only then, in high volumes, and ideally on all continents, can one truly speak of the beginning of the electric age in automobiles and a perceptible reduction of their environmental impact." The Group chief continues: "Nonetheless, until the production numbers of a purely electric car approach the success curve of a Polo, its schedule will indicate the year 2020 at the earliest. That is why our highly efficient TDI and TSI engines are the most important waypoints of the present. They will continue to be a dominant force for decades. And they are what allow us to make the step-by-step transition to the future. Cars with pure petrol and diesel engines – which in the foreseeable future will continue be unbeatable for mid- to long-range distances – will be supplemented by cars like the E-Up! in upcoming years, especially in the city. And that will happen starting in 2013. The concept car now being presented in Frankfurt very realistically shows how we envision such a Volkswagen with pure electric drive – technically, visually and with regard to a practical size." 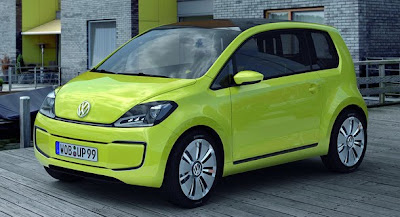 The zero-emissions concept car designed under the leadership of Dr. Ulrich Hackenberg, Member of the Board of Management, Volkswagen Brand, and Head of the Development business area, is based on modules of the New Small Family anticipated in the year 2011, but at a length of 3.19 meters it is even more compact. It also offers an innovative 3+1 seating concept. In its styling, the powerful and clearly drawn lines of the E-Up! body follow the new Volkswagen "design DNA" par excellence and show cult potential. That is because never before has an ultra-compact vehicle – which does not aim to be retro but forges new paths instead – brought such appealing, timeless, class-independent and dynamic qualities to light. Inside, the smallest Volkswagen ever also astonishes with its impressive space utilisation. 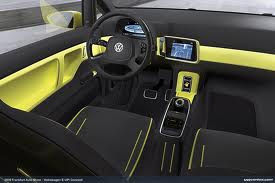 Drive unit – battery and integral drive
The 135 km/h fast 3+1 seater is driven by an electric motor with a peak power output of 60 kW (continuous power: 40 kW). The motor of the front-wheel drive car, which is mounted in front, develops a maximum torque of 210 Newton-meters right from rest. The driver activates forward or reverse gear via a rotary knob in the centre console. The fact that the E-Up! will also quite clearly offer driving enjoyment is demonstrated by a look at the car’s classic 0 to 100-km/h sprint time: 11.3 seconds. The E-Up! develops even greater responsiveness in the intermediate sprint from 0 to 50 km/h in city driving: 3.5 seconds. This dynamic performance is based first on the electric motor’s excellent torque characteristic and second on the low kerb weight of the E-Up!, which is just 1,085 kilograms. 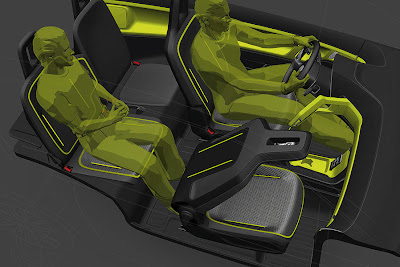 Lithium-ion battery: The car’s low weight is quite astounding, given the fact that 240 kilograms are taken up by the lithium-ion battery. The implemented battery’s energy capacity of 18 kilowatt-hours (kWh) enables driving distances of up to 130 kilometres, depending on driving style – enough for the city and the drives of most commuters. The E-Up! will be "refueled" in the garage at home, in a parking structure or on the road at one of the future municipal recharging stations that will be enabled by chip card. Depending on the available charging infrastructure and the battery’s momentary charge state, the storage battery could be charged to up to 80 percent of its total capacity within an hour.
If the batteries are recharged in a home garage, for example, by plugging it into a 230-Volt household outlet, this would take a maximum of five hours. Generally, off-peak night-time electric rates are very inexpensive. So refueled at night the E-Up! could be driven 100 kilometres for just two Euros in electricity costs (about 14 Euro cents / kWh).
The batteries themselves are housed in the underbody of the E-Up! To optimally distribute the weight of the battery system, it is housed in a special, crash-protected tray in the underbody frame. Air cooling ensures a constant heat balance within the batteries. The fans and heat exchangers needed for this are housed in the front section of the underbody.
Integral drive: The teams of Concept Development (headed by Ralf-Gerhard Willner) and Engine Development (headed by Dr. Jens Hadler) integrated all important drive assemblies and auxiliary assemblies in the engine compartment at the front end. The design of an integrated form of the electric drive made a key contribution toward reducing weight and space requirements for the drive unit. Background: All components important to the powertrain are unified in compact form in the so-called integral drive. In this unit, the electric motor, together with the transmission and differential, form the centrepiece of this drive. Energy is supplied via a high-power pulse-control inverter, which is combined with the 12-Volt electrical system DC/DC converter and the charger to form the compact integral drive. At 140 kilograms, the integral drive is also very lightweight. To summarise its advantages: low space requirement, ideal acoustic comfort, high torque and power development and strong driving performance in the city. So the system fulfils the requirements of an innovative electric drive in a nearly ideal way. 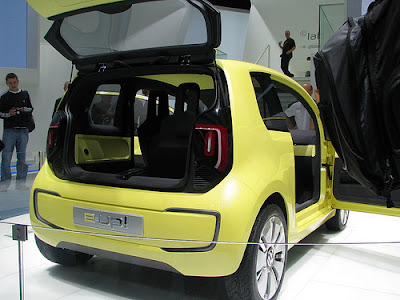 Styling – the Beetle of the 21st Century
The E-Up! emphatically demonstrates that emission-free Volkswagens will be anything but lacking in emotion. Responsible for this, once again, is the team led by Group Chief Designer Walter de Silva. Together with Klaus Bischoff (Chief Designer, Volkswagen Brand) and Flavio Manzoni (Head of Creative Design, Volkswagen Group), he developed a layout for the E-Up! that reflects the visual bandwidth of the future New Small Family. The E-Up! bears a resemblance to previously presented concept vehicles of this new model series – the Up! (city specialist), Space-Up! (microvan) and Space-Up Blue! (fuel cell powered van) – it represents a design stage that reflects the future production car even more closely.
HMI: The concept car has a touch-screen based HMI (Human Machine Interface) with intelligent E-Up! specific indicators and assistance functions. During navigation, the system continually monitors the momentary load state of the batteries, for example, as well as activated energy consumers such as lights and air conditioner, momentary traffic data, elevation profiles of potential routes and the locations of available charging stations. The driver can display these "filling stations" at any time; available charging stations may be reserved within a defined reservation time period.
The charging process can also be precisely planned to the minute via the HMI. This lets users charge the E-Up! during a specific time period in which electricity is available at special low rates. The charging process can be activated at any time via an intuitively operated application installed on an iPhone or similar mobile device, even from outside of the vehicle. Even more: From the application users can query the momentary charge status and vehicle location (the latter via map display) or simply check whether the car is locked. Moreover, to preserve vehicle battery power the program lets users pre-condition the E-Up! interior. This involves cooling or heating the car’s interior as long as the car is still connected to the charging station and is drawing its electrical power from the electrical grid. 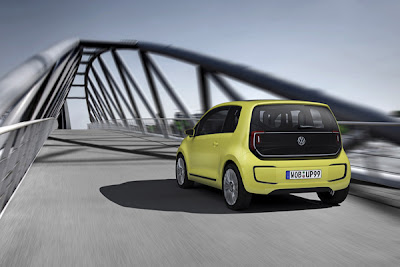 Micro-mobility in the city – made by Volkswagen
Volkswagen is comprehensively addressing implementation of this everyday practicality. These efforts not only encompass the vehicle itself, but the entire environment around the car driver. In the city, for example, this includes the realisation that after parking the E-Up! people will want to cover shorter distances without a car – from the job to lunch, to the fitness studio, another meeting, whatever is on the day’s schedule. For these shorter trips, the Volkswagen "Micro-mobility in the city" concept team has invented clever zero-emission micro-vehicles. The Kickstep, for example, which is an ultra-compact folding scooter. And the electrically powered Microbully, a scooter that also fits easily in the E-Up! load space. There is also the ped-tric, a folding bike with electric motors built into the wheel hubs that could also make the trip to the city aboard the E-Up! And even the VW_1M, a large electric moped – the size of a carry-on case when not in use – that could be stowed in the E-Up! without even needing to fold down the rear bench seat. Such micro-mobility solutions were created at the Volkswagen Design Center in Potsdam. So the E-Up! will be putting many things into motion. In 2013 this will become a reality for the first time.
E-Up! - Technical Data
Note:TDI, TSI, DSG and Twincharger are registered trademarks of Volkswagen AG or other companies of the Volkswagen Group in Germany and other countries.