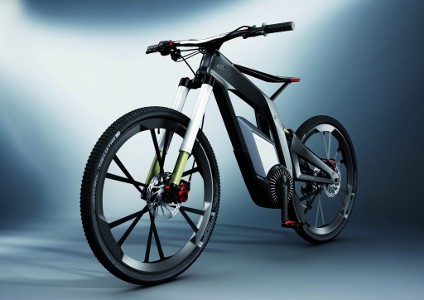 May, 2012
Last week German automaker Audi made its first big splash into the E-bike world, releasing photos and videos of an exciting lightweight prototype electric stunt bike that may be among the most ambitious projects introduced in this space to date. No specific names or dates have been announced yet by the Germans, so for now it is still technically a concept bike–but from the looks of it a radically groundbreaking one.
This ebike made #1 of our top 10 ebikes of the future list.
And is #4 on our 10 fastest production Ebikes list.
And to see the fasted ebikes in the world ever built check out our  10 fastest electric bikes on the planet.
Audi is making some other fast moves in the 2-wheel motor sport category with the announcement last month of their purchase of Italian motorcycle-maker Ducati for $1.2 billion in a rare move for an auto manufacturer. Ducati’s dealership network may well provide Audi with an instant world-wide distribution channel for upscale high-performance E-bikes.
And separately, VW, also owned by Audi, has been working on something they call “last mile transportation,” which focuses on the use of short-distance urban transportation.
Audi’s concept E-bike is what you would expect when some of Europe’s most skilled auto engineers and modernist designers get together and decide they are going to create a flagship E-bike with no expenses spared. 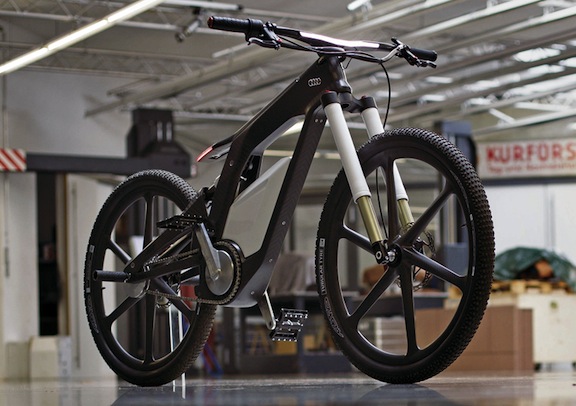 The Audi E-bike is based on custom carbon fiber wheels and a full-suspension carbon fiber frame; even the front suspension forks are custom designed for this bike. The rims look very similar in design to those on the $80K Blacktrail, leading to speculation by some in the E-bike community that this bike was partially designed by PG Bikes, the company behind the Blacktrail.  Certainly at least the Audi ebike designers had the obscenely priced  Blacktrail in mind when they designed their bike. The Audi E-bike also uses the same “Harmonic Drive System” as the Blacktrail, a highly regarded German design developed by Clean Mobile. Clean Mobile builds custom bottom-bracket drive systems for exclusive high end bikes made by innovative European companies such as KTM (see Egnition article here). Ironically Clean Mobile also went through an ownership change recently, first filing insolvency, and then being acquired by TQ-Systems GmbH and switching most of its staff just last month. 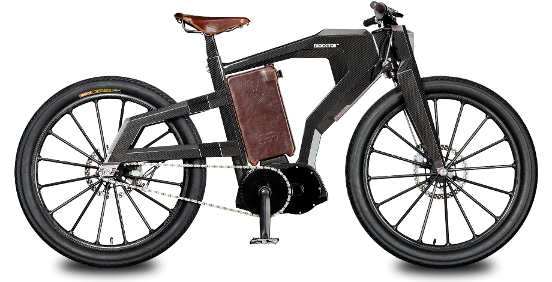 PG BIkes $80k Blacktrail… similar to Audi?
The key element to the Audi drive system designed by Clean Mobile, that it keeps the motor weight in the center of the frame (unlike most hub powered bikes which have heavy weight awkwardly placed in rear wheel) and most importantly allows the power to be driven through the bicycles  gear system. This means that the motor is allowed to operate in its maximum efficiency zone, because as we know, electric motors like to spin quickly at a high rpm.  Most expensive ebikes like this choose an In the Gear hub transmission like the German made 14 speed Rohloff (see our article on the Rohloff here). We are very surprised that  Audi opted to go with a standard derailleur system given the other flashes of bicycle technology in this bike such as the $800 Brakeforce one carbon fiber hydraulic brakes. We suspect that going with a derailleur instead of a Rohloff was a compromise Audi had to make to accommodate the carbon rims which have attached carbon spokes, and may have been a design blunder that will be corrected if and when the bike goes into production. Carbon rims with built in spokes make no sense on an ebike other than aesthetics, and add considerably to the cost.  To give you an idea the Blacktrail bike which uses an identical carbon wheel set, sells a replacement set of wheels and rims for a staggering $5000. 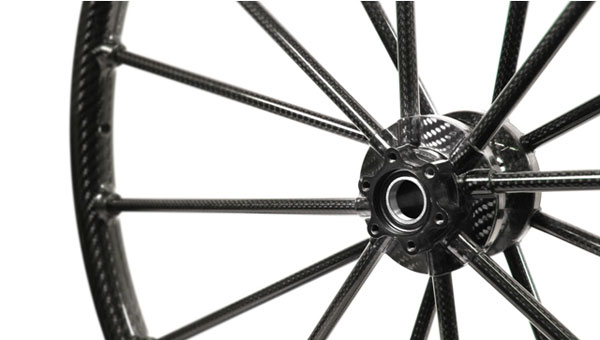 The Audi E-bike is designed with light weight, high power and nimbleness in mind, no doubt for BMX-type stunts such as those seen in the video, so does not carry a heavy, cumbersome battery pack. Instead it features a small, featherweight, quick-change pack, enabling the rider to choose between riding “naked” for short distances or hauling extra battery packs in a backpack for longer rides. The bike appears well-balanced, with most of the serious weight (battery and motor) situated very low and centered in the frame.  Best of all, it tilts the scales at a scant 46 pounds–unheard of to date for a full suspension E-bike. 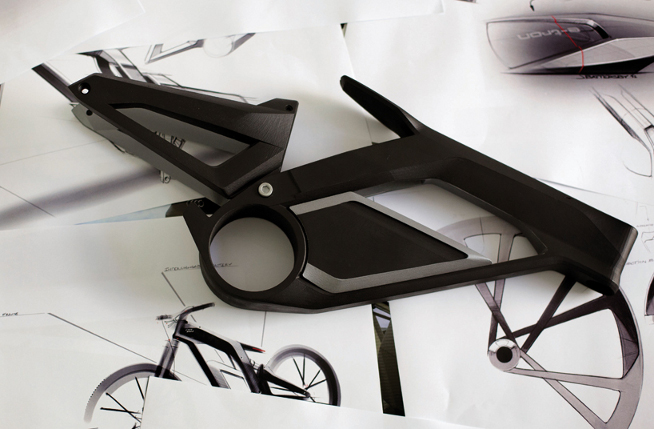 Other interesting design details include a motorcycle-like seat which can retract during riding to transform the E-bike into a trials-type bike for jumping and stunt-riding. A built-in brake/tail light in the back of the seat is a brilliant futuristic touch. The Audi E-bike also has LED lights built into the front of the handlebar, which you can clearly see in the below video. Smart details like these make this E-bike a showcase of sleek, integrated, forward-looking design.

Other goodies include a built-in Android smartphone app that serves as an electronic control system for the bike, not just monitoring battery and speed but a host of other useful functions, including the ability to toggle through five cycling modes: Pure, Pedelec, eGrip, Power Wheelie, and Balanced Wheelie. The bike also utilizes a torque sensor, which measures how much the rider is pedaling and can add power accordingly.  Another sweet feature of this control system is a lock feature, which locks the rear wheel and sets off an alarm if someone tries to grab and dash your $2ok bike.  All in all this is one of the most impressive efforts we have seen software-wise in an E-bike. In this picture you can see where an Android phone is attached to frame: 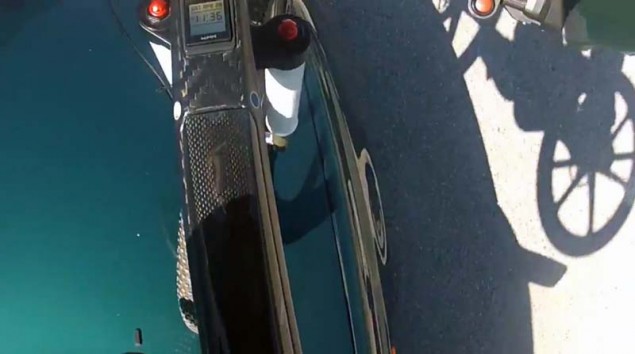