Electric cars have rounded a corner in their drive to enter the mainstream. Soon, you're going to be able to watch them race at high speeds.
The world's first fully electric Grand Prix racing series, the FIA Formula E Championship,  launches this year. It will pit single-seat electric-powered racers against one another on ten center-city street courses from Beijing to Los Angeles and Miami, from Rio de Janeiro to Monte Carlo and Berlin.  (See related quiz: What You Don't Know About Cars and Fuel.)
The first public demonstration of the car that all ten teams will use, the Spark-Renault SRT_01E, is set for Monday at the Mandalay Bay Resort and Casino in Las Vegas. A former F1 driver, Brazilian Lucas de Grassi, the official test driver for the Formula E, will be behind the wheel of the vehicle, which was built by Spark Racing Technology together with a consortium of some of the leading motorsports manufacturers, including Dallara, McLaren, Renault, Williams, and Michelin.
Formula E's glitz quotient ramped up substantially in recent weeks, with announcements that teams will be fielded by film star and electric drive enthusiast Leonardo DiCaprio (paired with the French luxury electric carmaker Venturi Automobiles) and by billionaire Richard Branson's Virgin Group. Other competitors include conventional auto racing teams, like IndyCar teams Andretti Autosport and Jay Penske's Dragon Racing, as well as squads that focus entirely on green technology, like Drayson Racing of the United Kingdom.
"The future of our planet depends on our ability to embrace fuel-efficient, clean-energy vehicles," said DiCaprio in a statement. (See related: "Pictures: Cars That Fired Our Love-Hate Relationship With Fuel.")
Read the full article on source site:
http://news.nationalgeographic.com/news/energy/2014/01/140105-formula-e-electric-car-grand-prix-race/


Formula 1 may be the most glamorous racing series in the world, but those V-8 gasoline powered engines aren't exactly in touch with today's environmentally conscious society. To counter this, the FIA (Federation Internationale de l'Automobile) is getting set to launch Formula E.
Using electric cars that look suspiciously similar to their gas-guzzling F1 bretheren, Formula E will also be a global series, run on street circuits in different cities around the world. Ten teams will vie for the championship, and as in F1, each team will have two drivers.  Of course one key problem with electric cars is their short range, so each driver will switch over to a fresh fully-charged car at the midway point in the race. That should make pit stops interesting.

The FIA says that the cars can accelerate from 0-60 mph in less than three seconds, so any thoughts that this will be like a bunch of racing golf carts should be quickly dispelled. One big difference will be noise levels, with Formula E cars at full speed making less noise than a city bus.
The inaugural Formula E series will kick off in Brazil on November 13 2014, with up to 12 races over the following eight months. Currently there are plans to hold two races in the USA, in Miami and Los Angeles. Hopefully they will remember to stop the normal commuter traffic on these street circuits, otherwise it could be a very slow race.
Check out the video to see a promo for Formula E. Perhaps they should reconsider the idea of having children playing next to the track with no barrier protection as you see at the 1.12 mark.

WEDNESDAY, OCTOBER 30, 2013
PALO ALTO, Calif.-- Tesla Motors today announced the opening of the West Coast Supercharger Corridor, energizing a network of stations that enable Model S owners to travel for free between San Diego, California and Vancouver, British Columbia.
With stations along U.S. Highway 101 and Interstate 5, the West Coast’s key routes, cities and destinations are connected by Tesla Superchargers. Model S customers can drive between San Diego, Los Angeles, Santa Barbara, San Francisco, Sacramento, Portland, Seattle, and Vancouver for free with minimal stops. More than 99 percent of Californians and 87 percent of Oregon and Washington owners are now within 200 miles of a Supercharger. 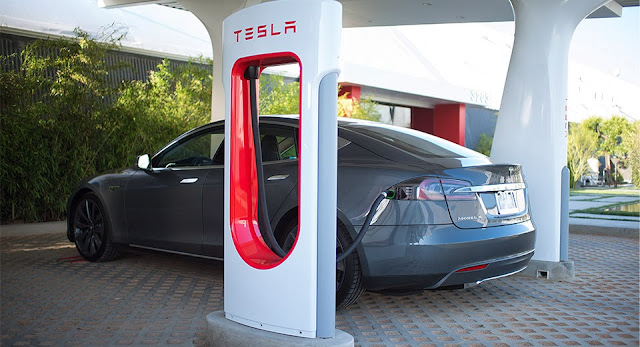 Tesla Superchargers are substantially more powerful than any other charging technology in the world, capable of charging Model S 20x faster than most public charging stations. Superchargers deliver up to 120 kW DC (Direct Current) power directly to the Model S battery, providing half a charge in as little as 20 minutes. Superchargers are strategically placed along major highways connecting city centers. Stations are located where customers want to stop, near amenities like roadside diners, cafes and shopping centers, so owners can stop for a quick meal while their Model S charges for free.

This morning in San Diego, two Model S will embark on a 1,750 mile #DriveFree road trip to Vancouver powered only by Tesla Superchargers. The journey will take them through Santa Barbara, San Francisco, Sacramento, Mt. Shasta, Portland, Seattle, and Vancouver, with stops at popular destinations such as the Santa Monica pier, Monterey Bay and the world famous Pike Place Fish Market. Throughout the trip, Tesla will be hosting owner and media events and providing real time updates from the road on Twitter, Facebook and Instagram

https://youtu.be/WEjQkkrsY5Y Lightyear One has been engineered coming from a radically different perspective. Our performance pushes u...