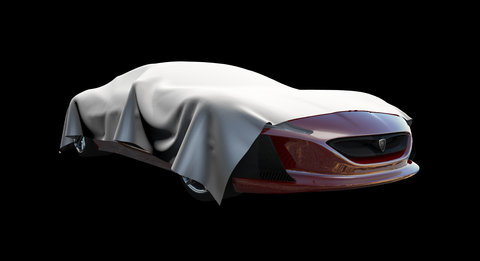 A teaser shot of the Rimac Concept One, scheduled to be unveiled at the Frankfurt auto show on Sept. 13.
“Croatia has no auto industry,” says Mate Rimac, a 23-year-old entrepreneur and automotive designer. “But that is about to change.”
Mr. Rimac has recently founded Rimac Automobili in an industrial park near Zagreb, the Croatian capital, where he has been constructing what he calls “a tremendous supercar.”
Mr. Rimac is taking that vehicle, the Concept One, to the 2011 Frankfurt auto show next week, where it could be regarded as the most unexpected vehicle of the hundreds to be displayed. 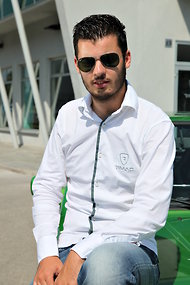 Mate Rimac, the 23-year-old designer of the Concept One.
“It is an electric supercar,” Mr. Rimac said. “It makes 1,088 horsepower, 3,800 newton-meters of torque (2,803 pound-feet) and is capable of going more than 300 kilometers per hour.” For now, he says that the top speed is being electronically limited.
Claims of generating Veyron-like power are remarkable for a car powered by an internal combustion engine, let alone an electric propulsion system. Asked whether the Concept One had been tested to 300 k.p.h. — or if it had indeed been driven at all — Mr. Rimac would say only that the car’s components were tested in a prototype on closed courses. A teaser graphic posted on the company’s Web site depicted the Concept One only in the design and construction phases.
The Concept One is powered by “four independent electric motor drive units,” Mr. Rimac said, producing a total of 800 kilowatts — the factor by which its horsepower calculation was achieved. He anticipates building 88 examples of the car and pricing them “a bit below the gasoline-powered competition from Pagani, Koenigsegg and Bugatti.” Rimac Automobili has firm preorders from “the Abu Dhabi royal family,” he added.
“The front and rear systems are separate units,” he said. “Each of them includes two high-speed, liquid-cooled permanent magnet electric motors, two liquid-cooled inverter units and two reduction gearboxes, integrated into one small unit.”
Mr. Rimac claimed that the vehicle would have a range of 366 miles on a single charge, beating the 300-mile range projected by Tesla for its Tesla Model S Signature series sedan. The Concept One features a carbon-fiber body atop an aluminum frame; total vehicle weight is said to be 3,630 pounds.
Additional details on the vehicle will be made available when the Concept One is introduced on Sept. 13, the first day of press previews at Frankfurt, Mr. Rimac said.
Mr. Rimac said he competed last month in an 800-kilometer “e-miglia” race in the Italian Alps for electric vehicles; he drove an older-model BMW E30 that he converted to run on some of the same electric propulsion technologies he developed for the Concept One.
“We didn’t know what we were doing, but we had fun,” he said. “The car performed great, even though we couldn’t use our speed advantage. We did enjoy passing all the Teslas, though.” 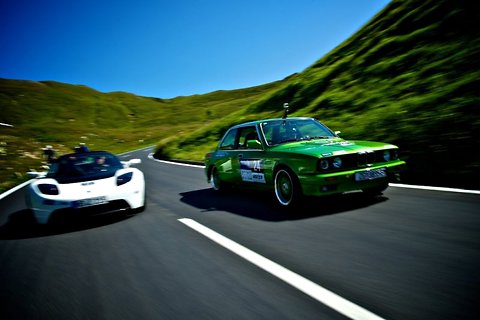 The E30 BMW converted by Mr. Rimac to compete in an e-miglia event held in the Italian Alps in August.