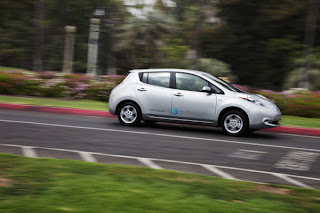 Heeren, who lives with his wife and children in Nashville, is the owner of NumberGarage.com, a virtual telephone company. His wife, Ashley, works with the Tennessee Parks and Greenways Foundation, a non-profit organization that works to conserve Tennessee's state lands.

"Electricity is the new fuel for cars, and the Nissan LEAF has the potential to transform the automotive industry and the way people drive," said Carlos Tavares, chairman, Nissan Americas. "Starting today, drivers in Nashville have the freedom to choose a future that produces zero tailpipe emissions, moves away from our dependence on fossil fuels, and represents the end of trips to the gas station. This Nissan LEAF delivery signifies the dawn of a movement that brings sustainable mobility to within our grasp."

Nissan in July 2008 announced that it was entering into a partnership with the State of Tennessee and the Tennessee Valley Authority to foster the development of electric vehicle-friendly policies and an EV charging infrastructure. This collaboration was the first of its kind in the United States and has served as a model for other markets across the nation.

"Just as Nissan has been working to put electric vehicles on the roads of Tennessee, TVA has been helping develop the infrastructure and technology to fuel them," said Anda Ray, TVA's senior vice president of Environment and Technology. "Early in 2011, TVA will unveil the first of its many planned solar-assisted charging stations in the state. We are moving forward with research, planning and electric systems that will help power the future of transportation."

"As an original member of Governor Bredesen's Zero Emission Mobility Project with Renault-Nissan, we recognize the value electric transportation will bring to our state and our role as the new fuel provider," said Decosta Jenkins, President and CEO, Nashville Electric Service. "We've made a commitment to our rate payers to continue providing the most reliable electric service at the lowest possible cost. We look forward to working with our residential and commercial customers as they transition to electric transportation."

Nashville and Tennessee comprise a primary launch market for the Nissan LEAF, as well as a participant in The EV Project, a research and charging infrastructure deployment project. The largest of its kind ever undertaken, The EV Project is funded by a grant from the U.S. Department of Energy and administered by electric-vehicle charging company ECOtality.

"Thanks to Nissan's industry leadership, Middle Tennessee stands poised to benefit environmentally and economically as electric vehicles take root in the marketplace," Nashville Mayor Karl Dean said. "In addition, the selection of our region to participate in the EV Project places us firmly on the cutting edge of the renewable energy movement. We are part of a very select group, and soon will be one of only a few communities in the United States to have a critical mass of publicly-accessible EV charging infrastructure."

The Nashville delivery marks the culmination of more than a week of festivities, as Nissan delivers the first Nissan LEAF vehicles to each of its primary launch markets in Northern and Southern California, Arizona, Oregon, Seattle and Tennessee. Nissan also is donating $25,000 to the World Wildlife Fund to mark the occasion.

The initial Nissan LEAF deliveries are followed by a second shipment of Nissan LEAF electric cars, which arrived on Dec. 20 and are destined for consumer driveways in time for the holidays. Nissan is on track for a nationwide launch of the Nissan LEAF by 2012, with Hawaii and Texas next to roll out in early 2011. In order to fulfill interest and meet demand in initial launch markets, Nissan plans to reopen reservations in the first half of 2011 as well as shift timing of additional markets until the second half of 2011.